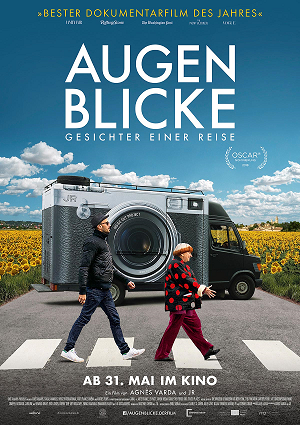 An unusual couple: Agnès Varda who just turned 90, a filmmaker and star in France since the 1950s. And JR, the street art and photo artist, who never takes off his sunglasses.
When they meet, they decide to do something together. What exactly, they don’t know, “a new kind of images” is the rough idea. Together they go on a journey cross-country with no clear aim and destination.
The only clear thing is: It had to be a real documentary. A film about other people. It seemed clear that his passion for sticking huge portraits of people to walls to honor them, and her way of listening to them and bringing their stories to the fore, would lead to something.
JR’s truck plays a leading role in the film: a mobile instant photo machine that transforms photos into huge black and white posters. They drive through the villages. Most people approached by JR like to be photographed. These encounters give rise to the wonderful documentary: “Faces. Places.
Agnès Varda is looking for people who once dug for coal in the mines and descendants of those miners. Jeannine is the widow of a miner and to be resettled, but she wants to stay: “I will not be driven out. I have too many memories here.”
JR and his people transform the whole settlement into a kind of stage, with old photos, in memory of the miners of that time. Jeannine also appears on the façade. She’s speechless. 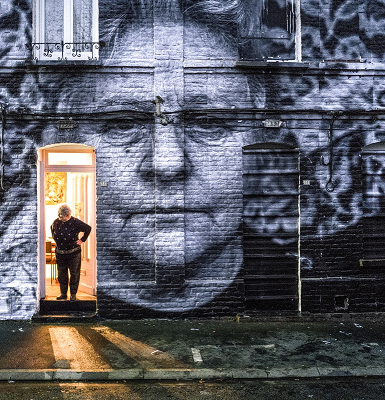 Some lose their composure when they see themselves in JR’s pictures. The small, inconspicuous life suddenly becomes visible and significant – also for them. “Every story becomes a work of art. I mean not only stories between Jeannine, and us but also between Jeannine and the viewers. The audience should love those portrayed. That was the plan. Jeannine as well as the postman, who was very proud of his giant photo! By enlarging the portraits, we make small moments big in the lives of people who are not in the spotlight,” says street artist JR. “Everyone in the village knows them, but all of a sudden you look at them with different eyes. They are talking about their picture. That is what the movie is about. That’s what art is about.”
Agnès Varda and JR stop where no tourist will ever get lost. They just follow the road, trust chance. Then stop in the right place – this is art, too. In a remote chemical factory, they get the entire staff to pose for a group photo. The people from the day and night shifts have little to do with each other – in the photo they are united. An employee can hardly believe it: Employees from all departments and shifts are mixed. You can also see some from the executive level. “So we do get along sometimes!”
JR and Agnès Varda’s film is not just about the charm of inconspicuous places and ordinary people. It is the story of a touching relationship between two artists who are separated by an age difference of half a century and yet find a common language.
The film also deals with this: time that can only be captured for moments. Moments that cannot be big enough because they are over so quickly.