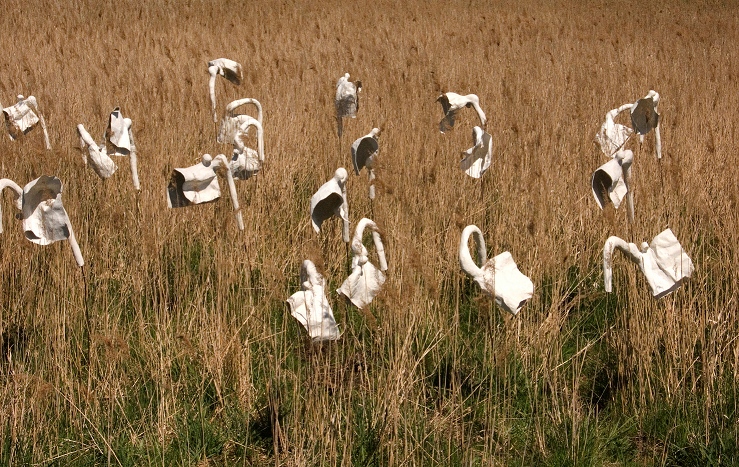 “The I Ballet” by Martin Henkel
Description of the installation:
The entire installation was first visualized in a 3-D program to get an exact idea of the character of the installation. The procedure for designing in a 3-D program is based on vectors and surfaces and in this case on animation. The same procedure was used in reality and in material. That means, first a wireframe model was created in original size, then the whole thing was covered with clay and modeled. The resulting figure was then cast in plaster and taken taken out of the mould, animated or changed in shape, cast again and so on. From these negative moulds, reproductions made of paper were created and copied. Thus, a dance formation was created, called “The I Ballet”, since they all descended from one figure.
The figures themselves consist of an arm, an implied body and a head. 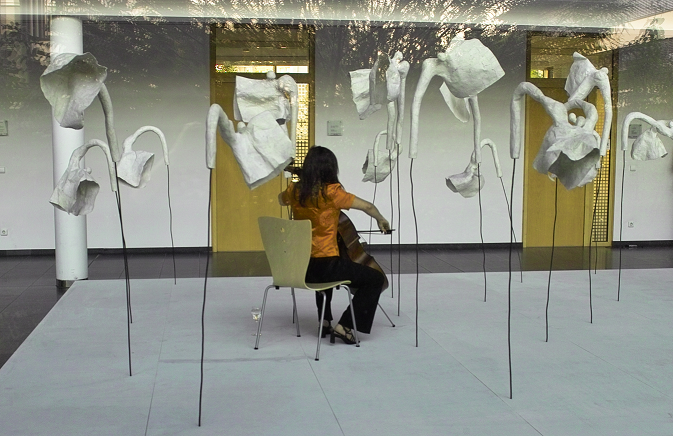 Meaning of the installation:
The implied body has something floating and flowing, in contrast to the arm, which symbolizes power and strength. In a figurative sense this means that processes and goals are not necessarily realizable despite one’s own will.
The small head stands for limited and – on itself – limited thinking.
The figures are captured moments of movement, such as frozen stages of a person’s life or efforts of self-fulfillment.
Placed on poles, with a thin cross-section, the figure has a flexible floor connection, but unstable grounding.
The movement efforts of this one multiple figure create an I ballet, a beautiful, active, but also absurd life form.