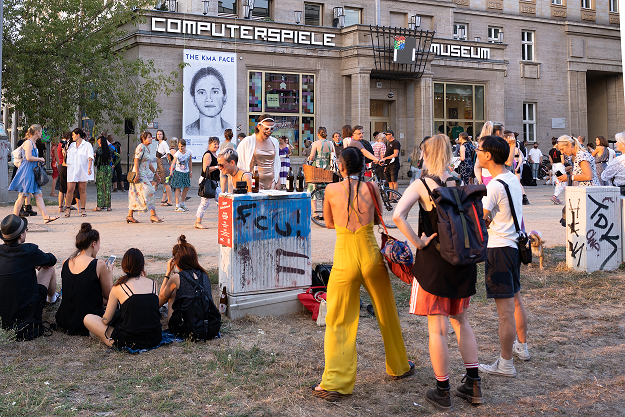 In cooperation with the Berlin-based design studio Strollology, the ndi network of experts and the SRH University of Popular Arts (hdpk), a series of events was developed, the prelude to which was the Art Walk on popular Karl-Marx-Allee kma-vision.de

In the spirit of promoting civic and local political commitment and strengthening the neighbourhood community, people of all ages, backgrounds and interests were invited to spend an evening of art and culture on Karl-Marx-Allee.
The dramaturgy of the rally was accompanied by elements of storytelling and a live program. Among other things, there were short story readings, screenings and also a fashion walk by local fashion designers. Further stations addressed the backgrounds and history of the site and recounted them in the form of musical interpretations, short films, personal stories and a quiz.

One of the highlights of the Art Walk was the Art Screening “KMA Faces” (by Strollology) in front of the Computer Games Museum. For this work, 30 inhabitants of the KMA were photographed. Their portraits were morphed with the help of a machine learning model and generated by an artificial neural network to constantly changing variants of the KMA residents. With this artistic work, the Design Studio not only wants to reflect and demonstrate the fluctuation and urban changes of the KMA. It also intends to sensitize residents to their responsibility and influence on the streets around the KMA and to make them feel part of a community (both visually and mentally) that will shape the future of the KMA. This project is characterized not only by its technical standards and artistic component, but also by its social approach, which promotes an awareness of collectivity and local political commitment.

Inga Lieckfeldt from SYLD store participated with a wonderfully unconventional fashion show format à la Berlin style – a kind of modern fashion walk, directly at the Computer Games Museum. The aim was to provide space and attention for creativity, especially local and sustainable fashion.
In contrast to well-known fashion presentations and tiring beauty ideals, the fashion was presented by Berlin designers themselves and by people from real life, beyond the conventional model norm. The goal: as colorful and diverse as possible. Beyond that, joy, showing emotions and having fun. The lively and colorful Fashion Walk was accompanied by Berlin Female DJ Diana May. https://www.facebook.com/SYLDSTORE/